Thank you for your interest in being a mentee in our Peer Mentorship Program!

We know how nerve-wracking it is to enter a new community, and dancing is no exception. Everyone seems more experienced than you, and you may feel really intimidated at times. The MCS Peer Mentorship Program aims to help you navigate the dance world and integrate into both MCS and the wider dance community. The program is similar to a “Big Brother, Big Sister” program and will last for three months.

Below are our mentors for the Fall 2019  program. Please review their bios and identify your top three preferred mentors of the same role as you.

Bella Bierezowiec
Bella loves how she feels when she dances West Coast Swing. Social dancing brings her happiness, and she has met so many wonderful people through West Coast Swing. (She is also 100% Polish and dancing in the Polish Club makes her very happy.) Bella wants to be a mentor because she was warmly welcomed into this dance community and wants other dancers, new to WCS or new to the area, to feel the same way. She is a grad student at SJSU studying speech-language pathology. She wants to work with children with severe communication disorders when she finishes school. When not in school or dancing, she can be found hiking or exploring San Francisco (she just moved up to the city!!).

Ruth Cnaany
Ruth loves West Coast Swing because it is the most creative fun dance she knows. She wants to be a mentor because she would love to share her knowledge and ease a newer dancer path into this fascinating world of WCS. She also loves gardening, cloths shopping, art, exploring, philosophy, ideas, and deep clear thinking.

Alison Gibson
Alison finds the technique required of West Coast Swing challenges her, and the variation and creativity inspired by the different styles of music is what draws her to the dance. She wants to be a mentor because this is one way to help introduce and integrate more people into the MCS community, and the wider WCS dance world. WCS dancing is her main *cough only cough* hobby. She lives in San Francisco, and she cycles pretty much everywhere. Her career interests are planning, public transit, and environmental issues. She’s been top-rope climbing a couple of times and enjoyed that. Despite her tendency to hold very long and involved conversations, she’s relatively shy and has introvert tendencies around people she doesn’t know well, but that changes if she gets onto a mutual topic of interest.

Denise Jeong
Denise loves West Coast Swing for its ability to be danced to all music and the wider community that extends internationally so that she has friends all over the world (that I can visit!). She now has met some of her closest friends through dance, and the dance pushes her to become better and better. She wants to be a mentor to share my vast experience to a newer dancer and show them the world that is available to them through this dance. In her spare time, she enjoys yoga, pilates, and photography.

Melissa Liao
Melissa enjoys West Coast Swing because it has a lot of freedom of expression, you can dance to a wide variety of music, and there’s a great community! She wants to be a mentor to help beginners feel more comfortable in WCS, since she knows how intimidating it can be. She’s a pretty nerdy person, and outside of dancing she really enjoys video games, reading fantasy, watching anime/sci fi movies, and sometimes cosplaying. She also loves to do outdoorsy things like hiking, climbing, and kayaking.

Maggie Moreno
Maggies feels like the structure of West Coast Swing gives her more freedom as a follow. She wants to be a mentor because she feels like this mentorship program is one of the best ways to directly build our community. Outside of dancing, helping run MCS is becoming an increasingly large part of her life. Also, professionally, she’s a software engineer.

Jodie Tarpo
Jodie thinks West Coast Swing is smooth and goofy, and she enjoys the music and community. She wants to be a mentor because she feels she could help her mentee make meaningful connections within the community and feel involved. She works in tech, enjoys being outside, and likes singing and playing piano and guitar.

Laurel Walker
Laurel loves West Coast Swing “CAUSE IT’S THE BEST.” She also just loves the amount of creative freedom you get as both a follow and a lead. She thinks it’s a perfect dance form for people who love all kinds of dance because you can fit all different kinds into your West Coast Swing. She wants to be a mentor because she loves this community and wants to help out. Laurel also likes social justice, writing songs, and listening to music. 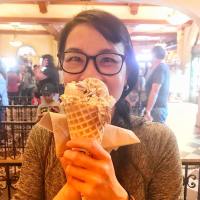 Alaina Yee
Alaina likes West Coast Swing because it has a structure, but it’s still ultra adaptable. She loves the moments of surprised delight that result. She’s pretty quiet and serious in social groups, but she warms up as she gets to know people. She’s struggled a lot in her learning, so she wants to be a mentor to help someone to avoid the same level of frustration. Outside of dance, she spends her time exercising, hiking, playing video games, reading, and taking random classes at CCSF.

Samuel Anspach
Sam enjoys West Coast Swing because It’s an outlet for him to be social and in the moment. It also gives him an opportunity to work at a goal – getting better at dancing. He wants to be a mentor because it would be another avenue that he could have a positive impact on the community. Outside of dance, he works in reporting for Dropbox. When he’s not earning the cheddar and not leading the CLEANEST left side passes, he’s inside playing video games, drinking somewhere in the city with non-dancers, or attempting to get swol.

Neil Fitzgerald
There are too many things to list for why Neil likes West Coast Swing. He thinks the process of learning and training the body to do things is fascinating, he likes the huge array of creative possibilities the dance allows for, and he loves the kind of people that West Coast Swing attracts. The mentorship program was a great experience for him when he was new to MCS, back in Fall 2018, so he’d like to be a mentor to pay it forward! He’s a software engineer at Dropbox. Outside of dance and work, most of his time goes to keeping in touch with a wide circle of friends. When he needs to recharge, he likes reading (mostly fiction) in bars in his neighborhood (the Dogpatch), doing the crossword, and playing games with my roommates. He was heavily involved in theater in college, and he still likes seeing performing arts when something catches his eye.

Frank Jiang
Frank enjoys West Coast Swing for its musicality, improvisation, and the opportunity to instantly connect and communicate with either a friend or a stranger. A lot of people have helped him grow in this community, so he wants to be a mentor to give back to the community. He is a software engineer, he reads a lot of scifi-fantasy, and he goes skiing and hiking regularly.

David Mulford
David has tried a number of dances, but he fell in love with West Coast Swing because of the connection and communication that’s possible. He got caught up in the competition scene, but he appreciates that while WCS is serious about its competitions, it doesn’t take itself all that seriously while doing it. He also appreciates the growth mindset of the community in general, as well as MCS in particular. It’s exciting to know that there’s always something more to learn. He would like to give back to the community, and he thinks this mentorship is an area where he can make an impact. He’s a software engineer, and outside of dance he enjoys music and video games. He’s studied classical and blues piano, and he played saxophone in the band back at college.

Paul Nunez
Paul enjoys West Coast Swing because he’s motivated by self-improvement, the variety in music in West Coast Swing, and the dance community. West Coast Swing has brought him a lot of happiness, friendships, and experiences that he would not have had otherwise. He wants to be a mentor because it fills him with joy whenever he’s able to spread a tiny fraction of the joy that this dance has brought him. Plus, there’s so many things that he wishes someone would’ve told him when he first started that would’ve made his first experiences even more enjoyable. In his spare time, he enjoys lifting weights, playing Smash Bros, watching anime, reading manga, and sewing.

Jason Wyman
Jason primarily loves West Coast Swing for the physical expression of movement through opposition. He also loves the wholesome nature of the dance – how he can share this dance with someone 16, 60, or anywhere in between or beyond. And he loves how it can be so masterfully silly, and it can also be a hugely emotional experience, all depending on what the dancer feels in the moment. He loves and cares about the people in this community, and he wants to be a mentor to help anyone who needs it the kind of community support that he knows we can offer. Lately he’s been exploring more solo dances: pole dancing, zouk solo choreo, and kpop (especially kpop!). He also plays Magic, and other silly video games like XCOM and Kerbal Space Program. Oh, also he loves pro wrestling. Like, way too much.

Get the latest news

Join our Facebook group and stay up-to-date on MCS and other West Coast Swing dancing in the San Francisco area. Join today!